College month continues! This time Sara came with me. She had an interesting encounter when working with a youth and having the college conversation. I have to reconstruct the discussion based on what I heard from her, but I hope to speak with the particular young man she spoke to in the future to learn more about what was said.

According to Sara, when she spoke to the boy he said he didn’t want to make his mother angry by going to college.

This confused Sara, slightly forced her to step back. She asked him to clarify.

His mother, he said, wanted him to work to help the family. Going to college would take away from his duty he said.

I felt a shiver when she told me this. I’ve heard this before, that sense that “Mexicans don’t go to college.” Even as I type this now, my eyes tear. It hurts, but it’s real.

As for me, I helped Fatima with her Powerpoint presentation about George Washington, revising her project to make it perfect. After we finished this, she worked on her next project, one for Black History Month. She would make two biographies of influential African Americans. She chose Martin Luther King, Jr. and the pop star Rhianna.

We focused on Rhianna this round. We did some research into her biography, and we both learned that she is an immigrant, from Barbadoes. When discussing this, I made the point the focus on this aspect of her life, and how it related to Fatima. That’s like me, she said.

Later that night there was a presentation of Ecuadorian dance at the library. The photos below are from the event. There were about forty people observing the event, which was conducted in English and Spanish. The dancer was from Quito and visiting Kentucky only briefly. She explained the indigenous significance of her movements and costuming for a largely non-Ecuadorian audience. 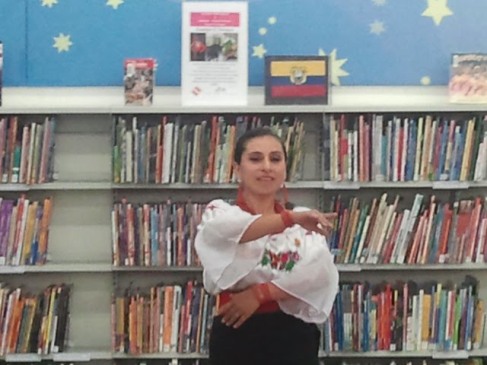